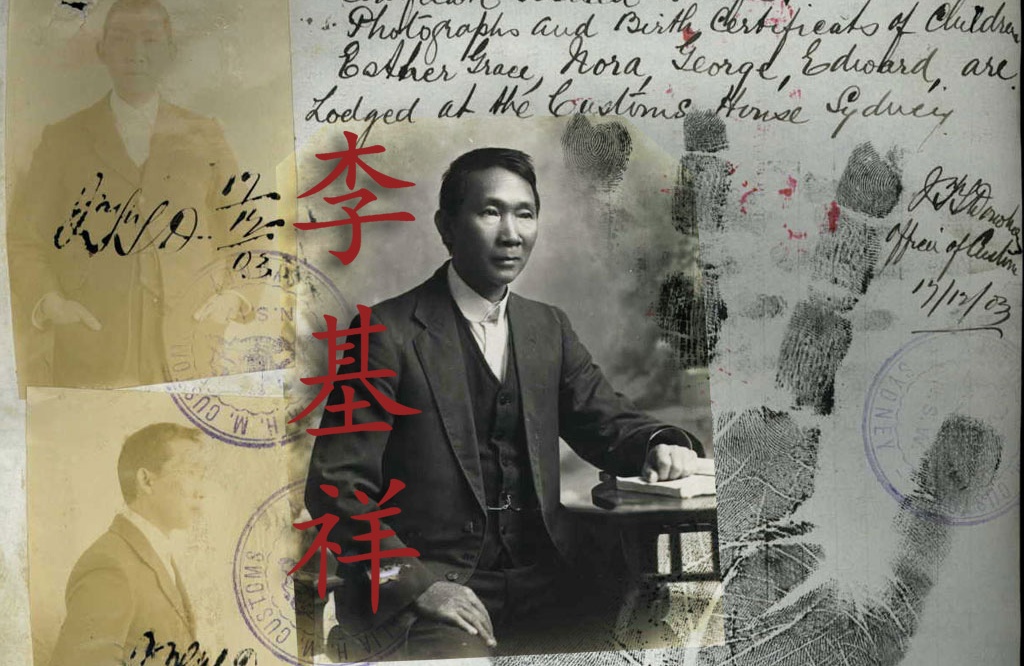 This simplified family tree shows some of the key individuals, highlighted in red are the family members that are Chinese-born. 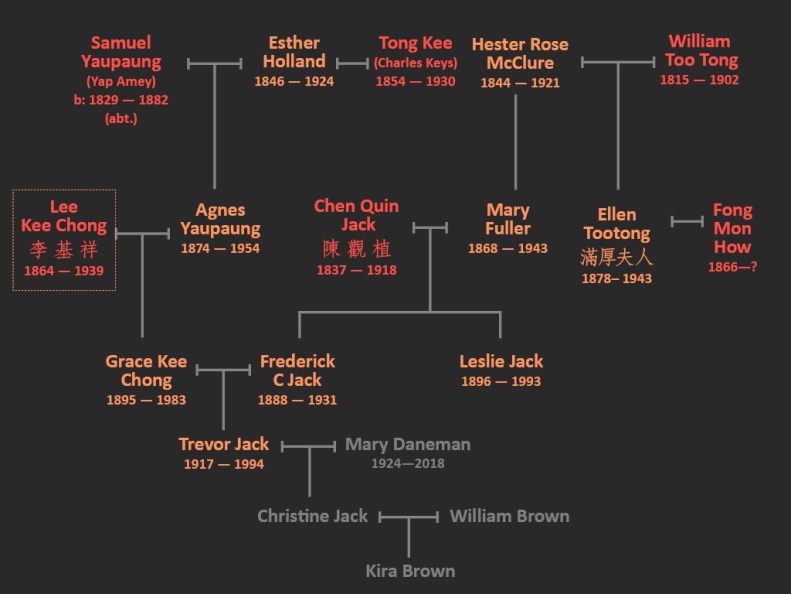 While not a lot is known about Lee in China, we know that life in Heung Shan would have been a struggle. There was a period of turmoil immediately after the recent 2nd Opium war and the consequences of the Civil Wars, dealing with corruption, high taxes, inflation, opium addiction, lawlessness, bandits, rapid population growth, record-breaking–droughts, floods, and famine.

And on top of all this, there may have been added pressure from within the family to leave China in search of employment opportunities and enrichment.

According to Beth Woo’s family research, in 1880 my great-great-grandfather Lee Kee Chong left Hong Kong aged 16, onboard the Brisbane of The Eastern and Australian Steam Mail Company. During 1880 thousands of Chinese sojourners arrived in Australia, before the introduction of the ‘Influx of Chinese Restriction Act’ of 1881, which aimed at drastically reducing, if not halting, the numbers of Chinese immigrating to Australia.

Arriving a generation after my other ancestors, Lee’s prospects would have been different. He was an educated man and was possibly sponsored by a family member or storekeeper from his home district. Lee lived and worked near the Haymarket-end of Sydney (now known as Chinatown) from 1880 to 84. He would have been provided with an employment and accommodation package.

To supplement his income Lee wrote letters on behalf of his fellow countrymen, and also acted as an interpreter for Chinese attending court as well as their interaction with local law enforcement.

By 1885, after Lee completed his contract in Sydney, he had accumulated enough wealth to venture-out on his own. Sydney at the time was not that attractive a prospect to a young Chinese immigrant – due to an upsurge of violence against Chinese traders as a consequence of the perceived threat of being swamped by Chinese immigrants.

Lee soon headed to the mining town of Tingha. Chinese migrants were attracted to Tingha by climbing tin prices. He probably started working in one of the general stores which quickly sprang up to support the needs of the rapidly growing white and Chinese mining community.

While working in a store in Tingha, Lee met Agnes Yaupaung – my great-great–grandmother. Agnes was working in a local Café at the time. A family anecdote relates that she asked her friend (and employer) as to whether she should marry this young man. She was advised to do so, because then she would be ‘safe’. They married in 1892 at the Wesleyan Church Tingha.

By 1894 tin-mining began to wane due to a drought, which affected the ability to dredge. Seeking new opportunities Lee set his sights on Moree. That town boasted a completed rail link to nearby Narrabri, an established Bank and School. Two years into their marriage they relocated. 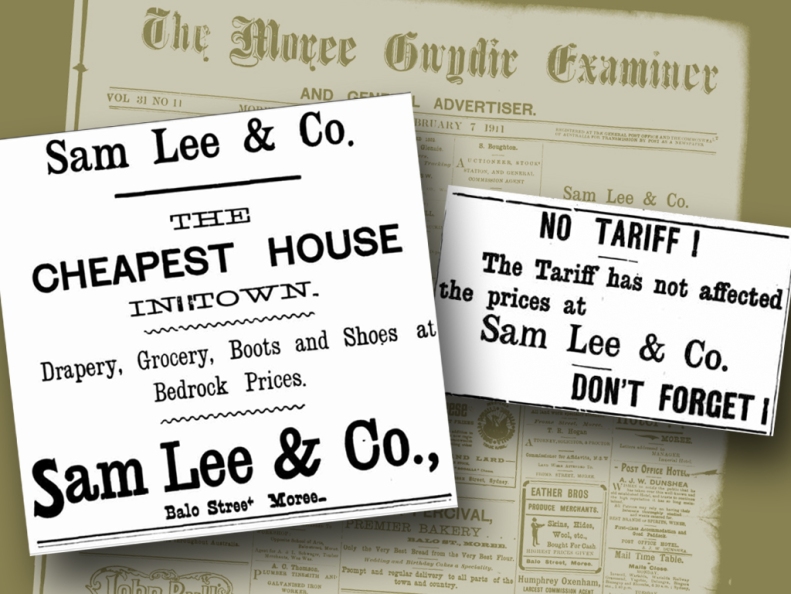 Lee and Agnes soon started a family with the birth of their first child, my Great-grandmother Esther Grace, who was born in 1895. This photo is of Agnes and her newborn son George. 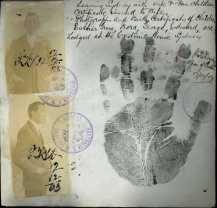 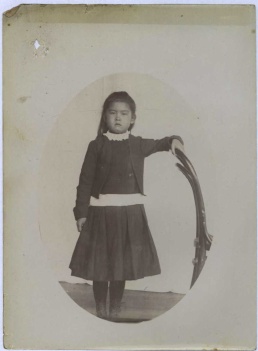 To celebrate Lee’s business success and show-off his new family, they embarked on a journey to Heung Shan in Southern China on 29th December 1903. Accompanying Lee on the journey were his wife Agnes and their four children Grace (aged 8), Norah (7), George (5) and Edward, their newborn son.

While in China the children would have become quite fluent in the local Chinese dialect – Cantonese and most likely stayed in Lee’s home village in Heung Shan.

While Lee was in China, he took a second wife. This understandably caused quite a bit of friction with Agnes – and Grace. Over the years Lee made several trips back to China visiting his ‘other’ family and according to Trevor my grandpa

“spent quite a bit of money over there supporting them.”
Trevor recounted an anecdote that he remembers being told by his mother Grace that … “the eldest son was kidnapped, by bandits. [Who] Came to the village thinking, or knowing possibly that any of the Chinese that came back home from Australia must be reasonably wealthy and of course he had to pay ransom. They kept him caged up for a few days and of course when his father paid the ransom, they got him back all right.”

Traveling to and from China after the newly introduced Immigration Restriction Act of 1901 referred to as the White Australia Policy, presented a raft of complex issues for Lee and his family. The new restrictions prohibited re-entry into Australia unless they could pass a dictation literary test. Initially, the test could be in any designated European language. In 1905 the bar was raised to make it more difficult and the dictation test could be in any language!

The only way to obtain an exemption from the dictation test was to provide documentation proving Australian domicile from an earlier period, or proven naturalisation. To circumvent these restrictions in Lee’s case he applied for Certificates of Domicile and Certificates of Exemption for the family.

Although the Immigration rules were prohibitively restrictive at the time, it has today inadvertently provided a treasure trove of documentary evidence relating to Chinese travels. The complicated official process of documentation and meticulous recording provides us with descriptions of their physical appearance accompanied by criminal-type mug-shot photographs and handprints, personal details, employment details and the number of years spent living in different towns. 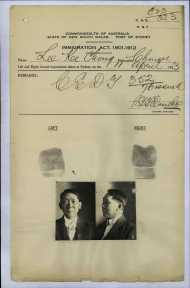 Lee Kee Chong returned to Australia 1905 disembarking in Brisbane, while his wife Agnes and the 4 children remained in China till 1906, returning aboard the “Empire”. Traveling with them on the return trip were Agnes’ sister Emily and her husband Sam Kee and their three children.

Application for Certificate of Naturalisation and citizenship – Australia

By 1911 Lee had been living and working in Australia for more than 30 years, he was married with seven children. On applying for a Certificate of Naturalisation he was rejected – on the grounds of being a Chinese subject! To add insult to injury his wife Agnes, on marrying Lee was recorded as “Australian born, but lost nationality through marriage with Chinese” and is declared an alien. 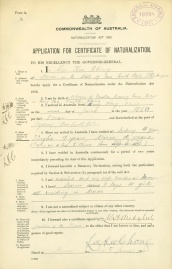 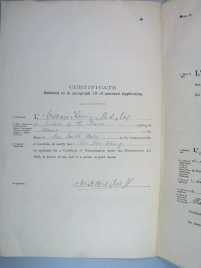 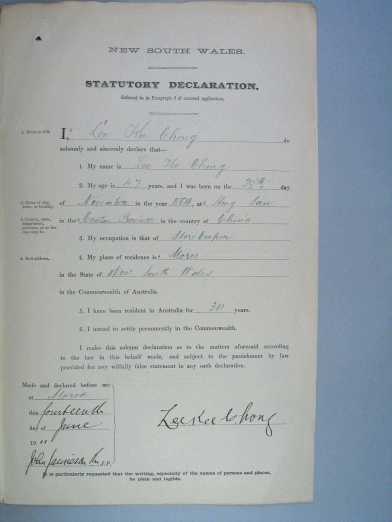 Then in 1940, now recently widowed, Agnes successfully applied for and had her British citizenship reinstated on the basis of no longer being married to a Chinese man. The stigma of her questionable nationality required that in 1944 she had to report to Police to obtain a statement from them to prove this.

By 1919 Lee and his family relocated back to Sydney and he becomes a partner in the prominently situated Hop Chong Company in Chinatown. On Trove, there are also numerous advertisements of his business the Hop Chong Company proclaiming they are: “Importers and Exporters” and “Fruit and Produce Merchants and General Commission Agents” at 100 Hay Street, Sydney.

During his lifetime the now relatively affluent Lee became a philanthropist. To perpetuate his family name back in his home village in China he petitioned fellow Lee-clan members to raise funds towards the cost of furniture and couplet inscriptions for a Lee-family ancestral hall in Hang Mei.

Lee Kee Chong died in 1939. Although he had made his fortune, his Australian children seemingly never forgave his establishing a second Chinese-based family, and they had become estranged from him. 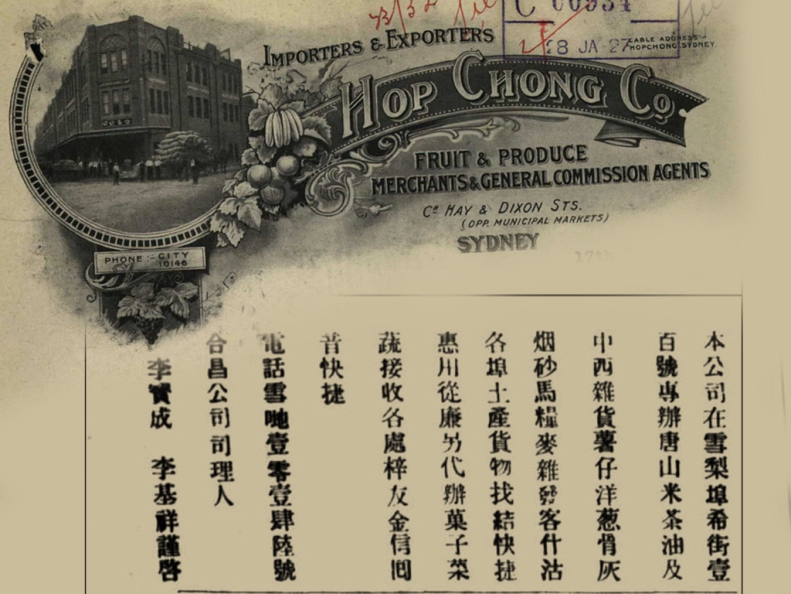 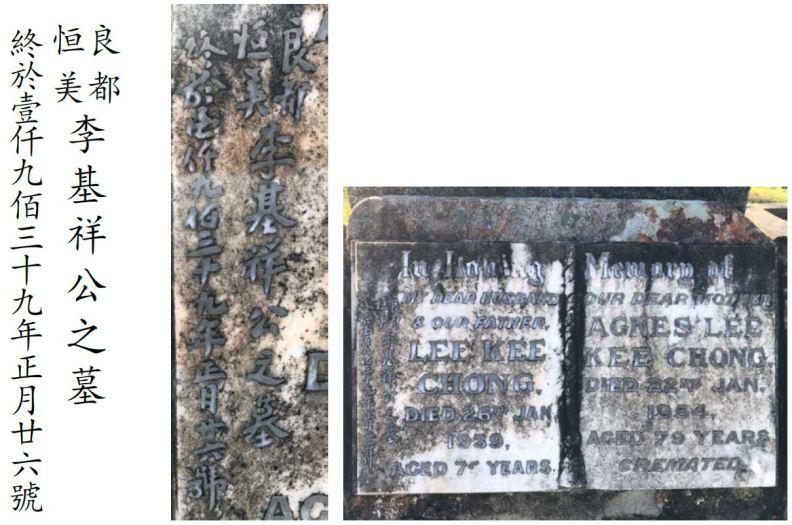 In May 2019, I visited Rookwood cemetery and located Lee’s grave. I was thrilled to discover Chinese characters on the headstone and I knew that with this information I could access his full Chinese name and place of birth –Hang Mei, Leung To, Heung Shan (Zhongshan). With the help of Douglas Lam and Ely Finch I had the text transcribed which substantially filled-out and added to his life’s story.

Additional research on Trove and links, by Ely Finch

A search of Trove made using the deceased’s Chinese name, reveals a fair number of articles in Sydney’s old Chinese-language
newspapers that concern him, and may contain additional information of interest. The following is a selection, each accompanied
by a summary of content: